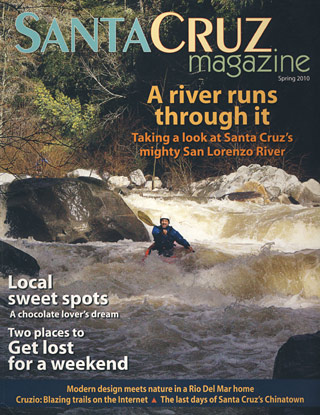 Where simplicity is king

This is the case for Leland and Marian Zeidler's house, which sits atop a Rio del Mar cliff. The striking structure, with its long, crisp lines and dramatic ceiling-high windows, has a strong, peaceful presence. The exterior is a neutral shade of smooth stucco, accented mostly by burnished block and seamless panels of grey rheinzink and glass.

"This is basically a piece of sculpture Leland said.

Fescue grass anchors the front of the home; 40-year-old olive trees from Northern California line the side of the house.

The only wood on the outside of the house is the front door - a thick walnut pivot door. A walkway that separates a rear courtyard from the front of the space is lined on one side with rippled glass that gives the effect of cascading water.

Entering the house, the ceiling is a little more than 7-feet high, but turn to the right and the living room has 16-foot high ceilings. A shoji-style door to the left slides open to connect the living room with the dining room, which has 12-foot ceilings and flows into the kitchen. The change in ceiling elevations creates a sense of openness. 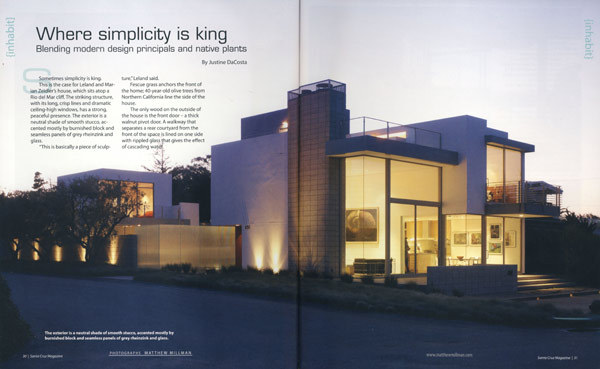 "It's always a surprise," Leland said.

The front of the home is primarily glass and is so connected to the ever-changing outside elements that the indoor elements are constantly transforming.

"Every time I come home, I see something I haven't seen," he said.

The entire home is a reflection of the Zeidlers and their lifestyle, according to architect Takashi Yanai of Southern Californiabased Ehrlich Architects, who created the 3,800-square-foot house. The process began in 2004, and the couple moved in on Halloween 2007. 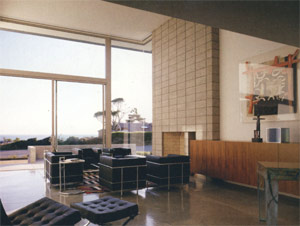 The blending of natural elements such as the ocean and fescue grass, with the smooth concrete floors, crisp, clean lines and modern art, create the feeling of warmth. 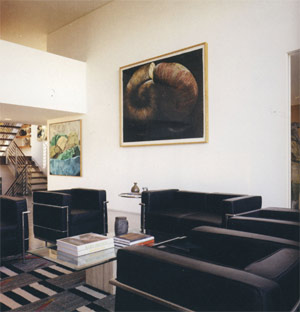 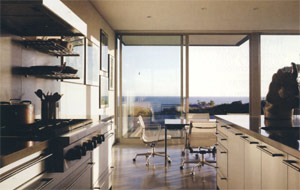 Their kitchen, designed in Germany, incorporates a countertop from Israel, split oak cabinets, and a built-in refrigerator that blends into the cabinets.

The Zeidlers completed a 40-page questionnaire to help the architects establish their needs and wants, which Leland found insightful.

"It's really an interesting study of my wife and myself," he said.

The couple loves to entertain and enjoy life, so the house is arranged around outdoor areas, including a rooftop terrace and courtyard. Although the courtyard is tucked away behind the house, it functions as an extension of the living room. A sliding glass panel opens from the entryway to allow seamless inclooroutdoor living - and a breathtaking view of the ocean through the ceiling-high windows in front.

Yanai credited the Zeidlers for hiring topnotch professionals, such as builder George "Bud" Fitch, who is also the Zeidler's sonin-law, and Tom Ralston, who handled the concrete used on the entire first floor from the main house through the courtyard and into the guest quarters.

"It's collaboration, a journey we take together," Yanai said.

The house is an example of what Ehrlich Architects describe as "multicultural modernism," exemplified by the Asian-inspired shoji-style door in the dining room and the functional courtyard, which is common in parts of Africa.

Yanai said landscape architect Steve Sutherland of SSA Landscape Architects captured the essence of the project, using a minimal number of elements in his design.

"With modern design, the most difficult thing ... is restraint," Sutherland said.

One of Sutherland's tasks was designing the Petanque court, which sits in front of a large deck in the front of the lot, open to the street.

"It's a casual, comfortable space to be in," he said. 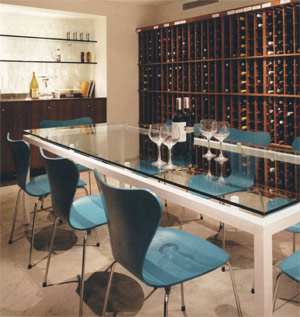 A dining room with 12-foot-high ceilings, a stylish modern table for eight and an extensive wine rack give an inviting atmosphere for entertaining.

He designed the sculpture garden in the rear of the lot behind the three-suite guest quarters. A stone walkway meanders through the garden, passing by displayed art, including a 6-foot-high glass and metal sculpture titled "God of Glass," by Santa Cruz artist Chris Tedesco. The large stepping stones are surrounded by elfin thyme, and flow around the side of the guest quarters and into the courtyard. Bamboo separates the Zeidlers from their neighbors, creating privacy.

The open courtyard has a lap pool on one end and a grill and Israeli tile countertop at the other. A stone walkway leads into the main house.

"It's not busy," Sutherland said. "It's really peaceful because it's really simple.'

Pieces from the Zeidlers' art collection define the character of each room. Before the couple moved in, a designer made his color choice for the walls very clear," You can have any color, as long as it's white," Leland recalled him saying.

Blending natural elements, such as the ocean and fescue grass, with concrete floors and crisp, clean lines accentuated by modern art creates a feeling of warmth. The whiteness of the walls disappears organically into the mix.

"Soon you don't see the white," he said.

The house is an example of what Ehrlich Architects describe as "multicultural
modernism." 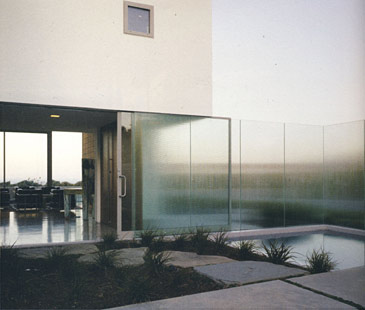 (Above) Rippled glass that gives the effect of cascading water surrounds the courtyard and lap pool. A stone walkway leads into the main house. This view from the rear shows the stained wood stairway leading to a rooftop terrace.

The couple enjoys elements of Bauhaus design, and uses sleek vintage furniture from the 1930s through the 1950s. Their kitchen, designed in Germany, features an Israeli countertop, split oak cabinets, and a built-in refrigerator.

Rich wood stairs - and an elevator - run from the full basement to the rooftop terrace. A wine cellar and tasting room sit beneath ground level; the second floor is the master suite, complete with a steam bathroom and an office overlooking the living room below.

As much as Leland and Marian enjoy their house, they agree it's just a house. It's the people that come there that are important.

"The house is a story," Leland said. "You're the one that makes a home nice, whether it's a one-bedroom, a five-bedroom or a mansion."