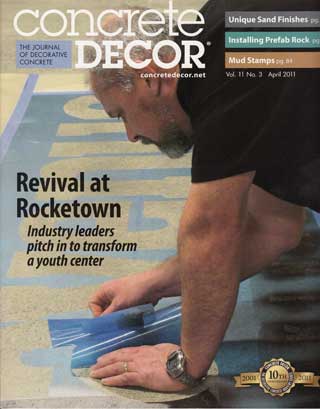 The new members were chosen by Hall of Fame members and owners and staff of Concrete Decor parent company Professional Trade Publications Inc., which manages the Hall of Fame.

The Decorative Concrete Hall of Fame was established to honor individuals and companies who have gone beyond the call of duty to help promote decorative concrete as a thriving business and a constantly evolving art form. These individuals' achievements and their commitment to excellence and innovation have helped the decorative concrete industry grow.

Tom Ralston - A third-generation concrete contractor out of Santa Cruz, Calif., Tom Ralston has the uncanny ability to understand concrete by recognizing its underlying beauty. He's taken his family-owned business to a whole new level by venturing outside long-established boundaries and discovering new uses for an age-old medium.

From building homes out of concrete and crafting concrete countertops to acid-staining a public skate park and creating a rock wall and staircase that won him a historical restoration award from the Santa Cruz Historical Society, this artistan time and time again pulls the uniqueness out of a concrete slab and exposes its characteristics in a very beautiful way.

And the best part is he doesn't keep his findings to himself. When Ralston learns something new about concrete, he reaches out to his constituents to share his knowledge. For more than 15 years, he's conducted seminars and delivered hands-on training at events sponsored by such organizations as the American Society of Concrete Contractors Decorative Concrete Council, the American Institute of Architects and the National Ready Mix Association.

In 2008, Schiffer Publishing published his book, "Cast-in-Place Concrete Countertops." A recognized expert in the field of decorative concrete who is certified by the American Concrete Institute, Ralston has had his work featured on the covers of seven magazines and has appeared in numerous architectural, trade and design publications.

Ralston currently serves on the Advisory Committee for Construction Education at Cabrillo College, in Santa Cruz, Calif., and has served on the ASCC decorative concrete Council board. A graduate of the University of Santa Cruz, Ralston has been at the helm of Santa Cruz-based Tom Ralston Concrete since 1989. He oversees 27 employees who tackle projects in structural, decorative, masonry and specialty concrete. In 2012, Tom was inducted into the Decorative Concrete Hall of Fame (see news).