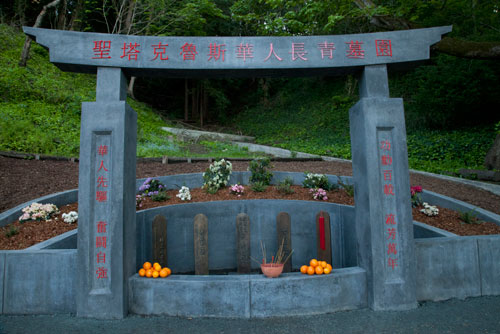 Tom Ralston Concrete has built quite a few very cool and interesting concrete and masonry pieces for Santa Cruz County. However I could make a strong case that to date the Chinese Monument that TRC built in 2014 in the Santa Cruz Evergreen Memorial is the most meaningful and significant.

There were many that contributed to the idea, the vision, and to the construction of the Chinese Memorial. The George and Emily Ow Family primarily funded the project. The Museum of Art and History helped to generate momentum and was led by Director Nina Simon. Nina's husband Sibley diligently worked with volunteers and organized labor to help pull the project together. The initial monument concept and inspiration was from Geoffrey Dunn and George Ow who met with me to begin brainstorming ideas for the memorial.

The Chinese that were buried in the Evergreen Memorial were immigrants that came to California and Santa Cruz to escape rebellion and civil war; but also to fulfill a dream of prosperity and to make a better life for their families. To paraphrase historian Sandy Lydon: the contributions that the Chinese made were fundamental to the region's economic development they were not treated as such. As history tells us many if not most of the Chinese settlers were treated like second rate citizens there are ample examples of gross prejudice.

Again from Lydon in his book Chinese Gold  "No Monuments, no prominent place names, no gilt "Chinese-style" buildings, and no large concentrations of Chinese people attest to the presence [and contributions made] in the Monterey Bay Region." 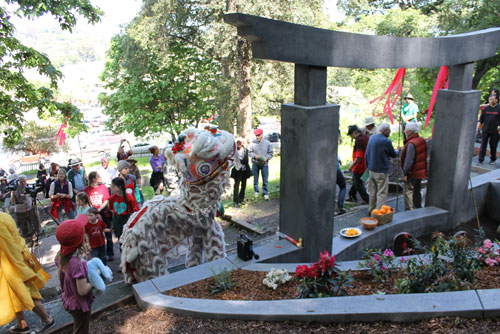 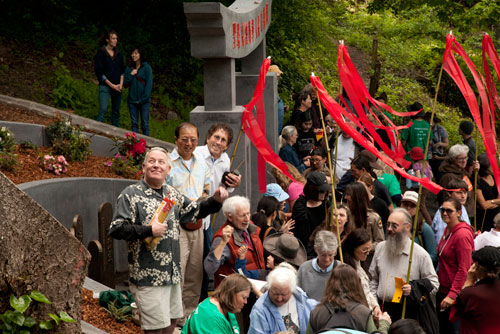 My vision for the concrete memorial was carried out by TRC's dedicated and hardworking crews and were led by master carpenter Rex Nicoliason. The structure, which was all poured together with a special colored SCC (self-consolidating concrete), when fully cured will be in excess of 8,000 PSI. Regular concrete starts at about 2500 PSI. Sean Monaghan who has partnered with me on many creative projects over the last 2-decades cast some incredible solid bronze headstones that had names of Chinese actually buried in Evergreen. The headstones were originally made with simple wooden 2 x 12's 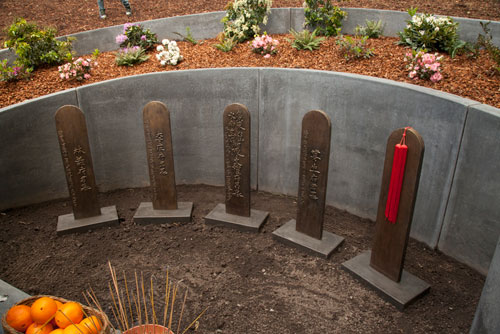 which had the deceased names carved into them. Sean beautifully replicated the wooden headstones with bronze and had his student, Yue Yu, provide the translation and calligraphy for the headstones. Ralph Royer and Josh Roton of RCR fabrication made exacting Chinese characters that were later powder coated a brilliant red. The red characters played beautifully off of the charcoal colored concrete. The translation and poetry for the monument was provided by Professor Yuming Shang. Other local contractors that contributed to making this happen was Landscape Contractor Randy Quilici, Lewis Tree Service, E Clampus Vitus Branciforte Chapter 1797, The Landscape Company, Homeless Services Center, Y.E.S. High School and many other volunteers.

Sibley Simon who is the chairman for the Evergreen Cemetery committee for the MAH took the lead for overseeing construction and making sure that the Cemetery was cleaned up and ready to go for the Quing Ming Festival or "Tomb Sweeping Day". According to George Ow in Chinese folklore, "if something is not settled during a lifetime, you have hungry ghosts, like angry spirits." Barring a nuclear warhead striking the memorial with a direct hit the structure will stand for thousands and thousands of years, forever feeding and pacifying the hungry ghosts.

I will be forever grateful for being asked to create such an important and significant monument. My thanks go to all! 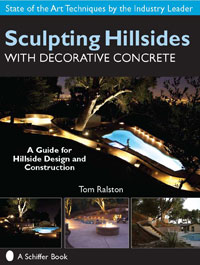 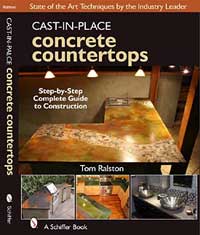 Or contact us to order your book. Visa and MasterCard are accepted.